Professor Neville Davidson FRCP. FRCR., the Lifetime President of the Helen Rollason Cancer Charity, is a Fellow of the Royal College of Physicians and the Royal College of Radiologists
I first met Irene and her husband John in November 2007. They came to see me at the Nuffield Health Brentwood Hospital after tests showed that Irene had developed bowel cancer in the lowest part of her colon.

This was devastating news to them both as it was the second time that Irene had been diagnosed with this type of cancer: after five years of treatment and recovery, she had been told she was in remission in 2006.

Unfortunately, due to the position of the tumour, an operation was not possible and Irene and John had been informed that there was little that could be done this time, but they absolutely refused to give up hope.

I started Irene on a course of treatment that year, beginning with chemotherapy and radiotherapy to kill the rapidly dividing cells in the tumour. It continued with Avastin every three weeks for eight sessions which helped to reduce the blood supply to the tumour, with the aim of preventing it from growing and eventually causing it to shrink.

In 2010, tests showed that the bowel cancer had started to spread so Irene completed a further course of chemotherapy two weeks on and one week off for six months. This was followed by two months of fortnightly antibody treatment in 2011 to slow the growth and spread of the cancer cells.

What struck me about Irene was her positive outlook throughout. She visited the hospital thirteen times in four years and, despite the pain and discomfort that she had to cope with, she never complained. She was determined to fight on but sadly passed away in March 2012.

Irene was an inspirational patient and her husband John – who was always by her side – has set up this website so that Irene’s story can give hope to others in a similar situation. He kindly collected £622 for Helen Rollason Cancer Charity at Irene’s funeral.
Irene will be remembered fondly by everyone who treated her and so it is a fitting tribute that the Nuffield Health Brentwood Hospital is planning to put up a plaque in her memory. 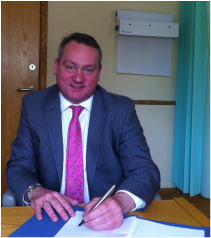 Dr Hugo Taylor MB BS, FRCS (Eng), FRCS (Gen). Member of the Royal College of Surgeons (England), member of Association of Surgeons of Great Britain and Ireland, member of British Association for Surgical Oncology.
I first met Irene when she had emergency surgery in December 2000. I have been lucky to meet many remarkable patients in my career, but she will stand out for me because I have never met anyone who went through so much for so long. She endured difficult treatments, without complaint or bitterness.

I have been through the records I have access to and have identified nineteen consultants who directly had input into Irene's treatment over the years, although there will be some I have missed. Each consultant will be supported by junior doctors, specialist nurses and secretarial staff. Then there are the ward nurses and support services on the ward , outpatient staff, radiographers, physiotherapists, dieticians, porters, managers and more.

I estimate that probably a thousand people had a direct input into Irene's care over the twelve years of her cancer fight. Why should this be?

While clearly it is our job and nothing less than the best will do for our patients, but Irene had an ability to pull us all into her battle with her indomitable spirit and will to survive.

She managed to achieve something none of us has seen. Having been given the "all clear" in 2005, the cancer returned in 2007. She went on through a succession of treatments until the end in March 2012. So long as things were properly explained, and put in context, she accepted them uncomplainingly and with great grace. This spirit, together with the unstinting support of her husband and family, empowered her to become the longest survivor of recurrent bowel cancer those of us involved in her care have ever had the privilege of meeting. Truly Irene was inspirational.


by Dr Hugo Taylor, member of the Royal College of Surgeons (England)